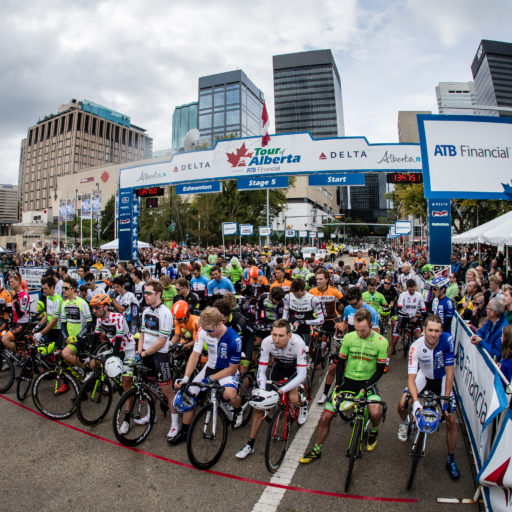 The 546 kilometre course will begin with Delta Airlines Stage 1 in the scenic Town of Jasper and route cyclists into Jasper National Park, annually voted one of Canada’s top parks, for three loops before ascending to Marmot Basin Ski Resort.

After a mountain stage opening, Delta Air Lines Stage 2 will be an out-and-back road race on the flat, rural roads around Spruce Grove. The stage will end with three circuits in the City of Spruce Grove finishing on King Street outside Central Park.

Delta Lodge at Kananaskis Stage 3 moves into Edmonton, a stage that will start and finish at Windsor Park at the University of Alberta. The circuit course, with 11 laps, features two climbs up and down the River Valley on the windy and challenging Groat Road.

EllisDon Stage 4 will challenge the field with the same iconic grand finale circuit that has become a signature course over the past three iterations of the ATB Tour of Alberta. The race starts and finishes in Churchill Square and the course highlights the scenic Edmonton River Valley and downtown district. This thrilling stage includes 11 laps and has been the site of some exciting finishes that determined the overall race winner.

“I’m super excited and a little bit nervous to come back to the Tour of Alberta as the defending champion,” said Robin Carpenter of Team Holowesko/Citadel Racing presented by Hincapie Sportswear. “The courses are always interesting and I think this year will be no different. I think the second stage will have to offer some chances for cross-winds to break up the race because we race in every single direction out in the prairie. I think the first stage will be the biggest practical test with a sprint at the top of relatively shallow mountain grade. The stage I am most interested in is the new Edmonton circuit race. I think the hilltop finish will be tough and the whole rest of the race will be super interesting, going back and forth across the river.”

Event President and CEO Scott Fisher said: “In our fifth year, we’ve put together a route that highlights many beautiful regions of the province and by combining start and finish locations and adding more circuits, we are able to offer spectators an amazing viewing experience. The race starts with a bang in Jasper and an epic mountain-top finish at Marmot. Spruce Grove then offers a scenic new route through the city and out to the beautiful countryside to the north. Finally, Edmonton as a five-year partner of the Tour, will host the final two stages in the heart of Edmonton and throughout the Edmonton River Valley, culminating in the exciting overall finish at Churchill Square.”